Imagine yourself looking at a full-body mirror. If you could magically walk into that mirror world and stand side-by-side with your mirror self, you would find that your left and right to be opposite of your mirror self. Why does the mirror reverse you from left to right, and not from top to bottom?
Richard Feynman explains this conundrum, briefly. The mirror doesn't reverse you, it reflects you. Feynman asks you to imagine a point on your nose being pulled into your face and through to the back of your head. Repeat this for every point on the front of your body, and that's essentially what the mirror does to create your image.
I wasn't really satisfied with this answer however. It tells you why the puzzle is based on a false assumption, but it doesn't explain why the puzzle carries so much intuitive appeal. I would raise my hand and object, "But Professor Feynman, the mirror does seem to transform left to right! If you're wearing a shirt with text on it, just look in the mirror and you'll see the text read from right to left. And why is it that reflection looks so much like left-right reversal and not top-down reversal?"
The specialness of the left-right direction drove me crazy for days. I couldn't pay attention in my optics class. I was often found staring at my own reflection like a narcissist. Here's the answer I came up with.
Your mirror image is left-right reversed in the sense that were I to magically walk into the mirror world and turn around, my left side would correspond to the right side of my mirror image. 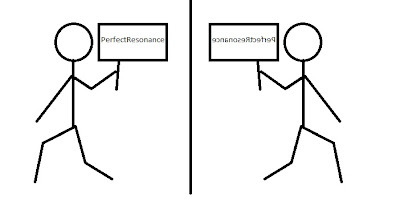 But by choosing this as my thought experiment, I have already implicitly assumed left-right to be my preferred direction. Suppose instead that I entered the mirror and lurched forward into a handstand. Then my right hand and left hand would correspond to the image's right and left, but my head would be at its feet! The mirror has reversed up-down but not right-left. This flipping transformation is just as arbitrary as turning around by walking, but we don't imagine it that way because gravity has trained us to think of up and down as fixed directions. Also, we write text on our T-shirts in such a way that it is readable to people who are left-right reversed with respect to us. However, if we moved around by slithering on one side (and we all have to choose the same side to slither on, left or right), our T-shirts would be written in upside down text, and our mirrors would show vertically flipped text! (Incidentally, that would make it easier for you to look down and read your own T-shirt.) 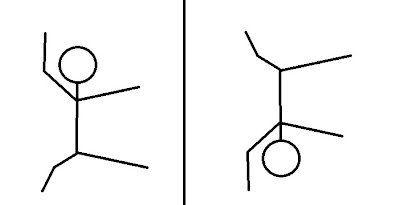 So there you have it. The thought experiment of walking into the mirror is subtly deceiving. It already presupposes the direction (left-right) that will appear to be reversed. On the other hand, to do a handstand into the mirror is to choose yet another direction (top-down) that will be reversed. And if you stand still in front of the mirror, which direction is reversed? The front-back direction, of course!
Notice that no matter how you rotate, flip or move yourself, your mirror image will always be reversed, with respect to you, along some direction. Your mirror image is somehow fundamentally different from you, simply because you are not mirror symmetric, like a perfect sphere would be. The term for this mirror asymmetry is chirality, or handedness.
This problem is relevant in biology as well. One of the most astounding mysteries of life here on Earth is that all of the amino acids (the building blocks of life) we know are "left-handed." To put this in terms of our mirror puzzle, every amino acid can be thought of as a T-shirt with text on it. A world in which all amino acids are "left-handed" is analogous to a world in which all T-shirts have forward text. Okay, maybe the text direction is just convention, but molecules don't have conventions. They don't gather around, form committees and decide that everyone should write in forwards text. And even if they did, shouldn't we be able to find exceptions? Leonardo da Vinci, for example, wrote in backwards script. Where's the Leonardo da Vinci of amino acids?
The questions are thrilling to consider. I urge you to read this blog post which summarizes one hypothesis for the problem of "left-handed" life. Consider: if the building blocks of life came from a meteorite, and the meteorite passed by a sun which emitted damaging UV-rays, and the UV-rays were polarized such that "right-handed" amino acids were preferentially destroyed, then our primordial ancestors may have been lucky molecules that survived where their mirror images could not.
,sruoY
kereD
Posted by Derek Huang at 3:18 PM