Last Saturday I took part in Heidelberger Herbst, which is the fall festival and one of the biggest events Heidelberg hosts in the year. It was an all-day affair, starting with flea markets in the early morning and going until late night when most of the drunken revelers would migrate into the bars or clubs. I've found that I enjoy tourist activities more when I try to direct my experiences toward a couple overarching themes. In the Heidelberger Herbst, I strived to explore as many different places and events as I could, while paying special attention to music performances.
By far the most interesting items on sale (for me) were the books. Even though my understanding of German wasn't good enough for me to really take advantage of these deals, I did find a couple interesting ones that I'll save as incentives for improving my reading skills: a book of poems by Derek Walcott, with English and German versions side-by-side, a little book on Physics, and a collection of fictional letters written by a Chinese Mandarin from the year 1000 AD who travels through time and finds himself in modern-day Munich (a reminder that no matter how much one feels like a fish-out-of-water, there is someone else who, in comparison, feels like a fish-flying-through-the-air-among-birds). 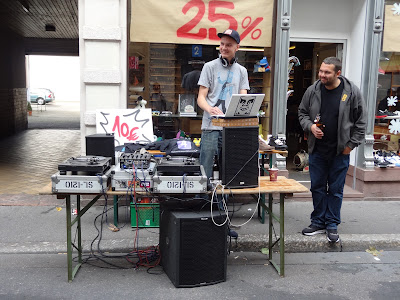 There were probably about six different locations around the Altstadt in which music was constantly being performed throughout the afternoon and evening. Smaller acts in the streets varied from musicians jamming out on guitars to DJ's of both hip-hop and electronic styles.

Up until the late afternoon, I was just an observer, making my circuit around the streets, ingesting, imbibing, listening and photographing like a true traveler-consumer. Then, at Friedrich-Ebert Platz I came across a DJ performing an interesting mix of songs, and I decided to dance along. A crowd started to gather around to watch me, and I realized that I had become part of the show, a notion further reinforced when the DJ himself approached me to offer a can of Red Bull, gratis. "Don't stop dancing!"

At one point during my dancing, a toddler who had been bouncing to the beat stepped forth from the crowd and gave me a curious look, but alas, he shortly ran back to mom and dad. Fortunately, there was another person who was willing to dance alongside me. Here's the video:


I'm a little embarrassed by this video because I misunderstood what the girl (Lorena) was saying. She complimented me on my dancing and said something about dancing together with me, while pointing to a group of people (cameraman included). I thought she was asking if I wanted to go along with a group of friends to dance somewhere else (maybe a club or something?) and asked her, "Where?" which must've sounded totally ridiculous but anyway, I'm really glad she kept insisting instead of giving up, and eventually we got around to a wonderful "duet."

Later that night I went to a concert and discovered that I had become a minor local celebrity of sorts. At the club entrance, the ticket seller recognized me immediately. "You danced wonderfully!" she said. "Thanks!" I replied, pulling out my wallet. "How much does a ticket cost?" She shook her head and waved me in. After a moment of confusion, I understood and said again, "Ah, thanks!"

At the concert, I met another student, Sven, who saw me dance earlier; we talked and introduced ourselves over the music and noise (which means talking loudly into the other person's ear and then tilting your head to hear what their response is, which is done out of necessity so often in clubs that it no longer seems weird, a fact which is pretty weird if you think about it.) We talked about the best places in Europe to travel to, and what living in Heidelberg is like. A couple hours into the concert, I had finally exhausted myself, and decided to return to my dorm.

So those were the highlights of my day at the Heidelberger Herbst. It was the first bona fide adventure I've had since arriving in Germany: great food, interesting music and new friends. I couldn't ask for anything more. 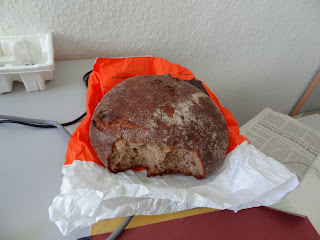 When I first bit into this loaf of bread, I wanted to cry. It was sour, a little sweet, and very bitter (not in the way that medicine is bitter, but rather more like coffee made from dark roast beans). The flavors seemed to morph--first bitter as I chew the crust, then sour near the center. The crust is hard and painful to chew but with a very satisfying graininess, and the center of the bread is soft enough for a baby's palette. I think to myself, "My god, how have I been missing out on this my whole life, why do Americans not demand their bakeries for bread with CHARACTER, bread that weighs like a brick and FIGHTS BACK against even the sharpest knife and conveys a taste that contains all the bitterness and joy of life itself? (Images come to mind of a Nietzschean Over-man standing on a cliff, watching his weaker brethren fall into the abyss below whilst he chews heroically on a loaf of bread. A tear trickles down his expressionless face.)"
The picture you see above was taken 10 minutes ago. Right now I've eaten about half of the loaf, because I can't stand the thought of letting it sit and lose its freshness. Every waft of breadiness that I smell now is another miniscule fraction of the bread's vitality, lost forever. And another thought strikes me. I need to start using a bread knife! Ripping out chunks of bread entails digging my fingers into the exoskeletal crust and compressing the soft interior, thus ruining to an extent the wonderful contrast of texture that this bread offers.
Shockingly, I have no reason to believe that this loaf of bread is anything special. There seems to be a bakery in nearly every block near Bismarckplatz (the commercial hub of Heidelberg), all offering similar varieties of bread, baked fresh daily. I can already guess at what I will miss the most when I return to the States. Before I thought it would definitely be German beer, but the bread is now a contender, for sure.
Posted by Derek Huang at 6:21 AM 3 comments

So here I am--in Heidelberg, Germany--feeling simultaneously like a grown-up and a child, grown-up because I´ve never really lived by myself before (even in college I was just a two hour car drive away from my parents, whom I visited every few weeks), and also childlike because in this different culture, I find so many facets of daily life I take for granted are different, with the differences ranging from subtle to mind-blowing, e.g. my apartment door has a knob on the outside that will not turn, being solely designed for pulling and only coincidentally for confusing Americans. And the most important contributor to my childlike feeling is that the language is very new to me. When I was child (and still learning English as a second language), I would annoy my parents by reading signs aloud, wherever we went. This was especially amusing during car rides, where the frequency of passing signs allowed for continuous English practice. Now, over a decade later, I've found myself engaging in this practice again, though thankfully I've learned to keep most of the speaking in my head.

I've been asked whether I will write a travel blog. The answer is yes, in the sense that I will continue to update this blog with whatever is important to me at the moment, travel experiences included. But I find that I prefer to write about experiences only after they have been filtered by a period of contemplation and consolidation (I am not a live-by-the-senses person).

What am I to say about my first two days in Heidelberg? This place is a tourist stop, college town, bustling science center and historical landmark. I have listened to my housing advisor speak to me in German and English, stopping occasionally to speak with a colleague in Spanish. I have heard German spoken in a Chinese accent for the first time in my life (apparently there is a sizeable population of non-tourist Chinese here). I have sampled a Mexican restaurant's Tostada de Carne Asada, which would be more accurately described as a quasi-Turkish kebab. I have seen not a single bike rack; most riders are content to simply lock the back wheel to the frame, rendering the bike only marginally more difficult to steal. I wonder why Tucson bike thieves don't emigrate here en masse, but the higher cost of nearly everything is surely a deterrent.

I said that I'm not a live-by-the-senses person but that is partly a lie. This experience has happened to me before, when I was three years old, an age where no-one is cerebral as much as they are in-the-moment. At least I remember some moments, like when I fell mute and sat down utterly embarassed during a show-and-tell presentation, or when I learned the word "water" by noting that "wa" means "to dig" in Mandarin, as in: to dig a well. I wish I remembered more from that time, what it was like to be surrounded by a language I did not know, and a culture that was foreign to me.

When I was bidding farewell to my friends, almost every one of them said some variant of "enjoy yourself" or "have fun." I'm not saying that's bad, but why does our culture have such a limited view on the worth of experience? Goodbye, have an *enlightening* time! I wish you the very *strange and paradigm-shifting*! Hey there, what's up and do you use language mostly as a shared script or as a creative medium, and how do you switch between the two modes? What does it mean to be an adult, and is that something you truly want for yourself, or something you just have to accept when you blow out your *somewhat arbitrary number*th candle?

Derek
Posted by Derek Huang at 9:42 AM 0 comments